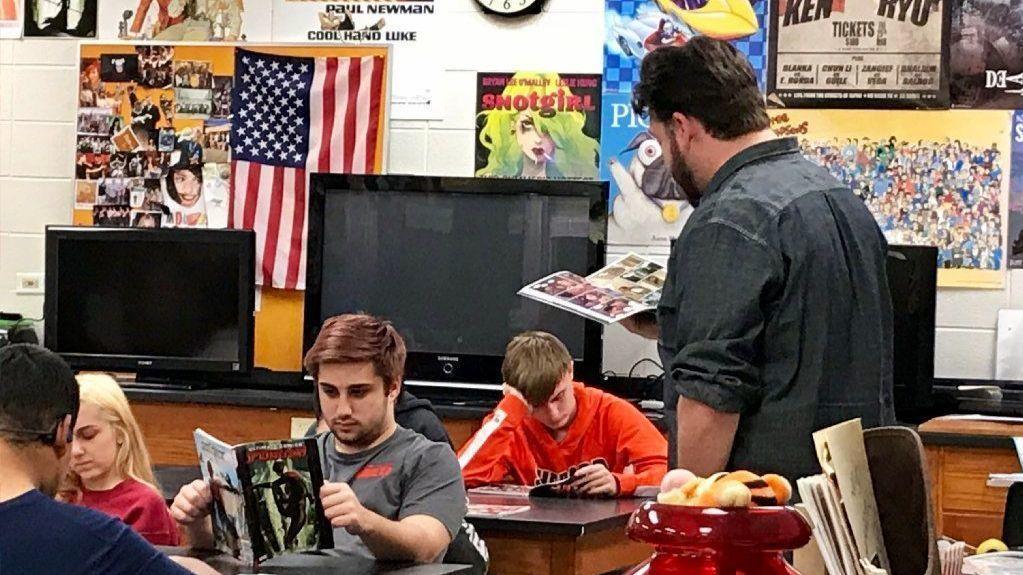 Stan Lee died, Eric Kallenborn was tweaking his English classes to commemorate the man who was often called the superhero of superheroes.

Lee, legendary publisher of Marvel Comics, died Monday at age 95. On Tuesday, students at Alan B. Shepard High School in Palos Heights commemorating the literary master by digging into his life's work.

Kallenborn is a longtime believer in the skill of graphic novels and comics to engage reluctant readers and spur conversation among all readers.

Kallenborn said, the characters Lee created are especially endearing because they address social issues, which makes them more relatable and good topics for discussion.

And the world has Lee to thank for much of that, he said.

"Stan Lee was a brilliant man who helped create more than 300 characters with the help of the team (at Marvel)," Kallenborn said.

Kallenborn said his English classes were set to start a new unit in Nov. 13 anyway.

"But then I was like, 'Oh snap, Stan Lee died. So I modified things," he said.

His graphic novels class started reading "Miles Morales," about a new bi-racial Spider Man. His film class would be watching "Black Panther." And his creative writing students were working on their own hero-driven short story.

All of the kids, he said, would be exploring social issues, much the way Lee did.

They know that every superhero has one foot planted in the real world, he said. Every struggle with his or her own humanity.

Issues of discrimination, hope, pride, ego, race and acceptance are all addressed through the eyes of Lee's characters, Kallenborn said.

"The 'X-Men' is about diversity and discrimination. The X-Men mutants were looked down upon. People wanted a world that was anti-mutant, "he said. That story, he added, was a way for Lee and Marvel to get the issue of diversity without being a race / color issue.

"I think it was awesome," he said.

"When 'The Fantastic Four' came out people asked if the language was too mature, too difficult for children," Kallenborn said. "Stan Lee said 'I'm not trying to write baby books. I'm trying to teach kids something and if their vocabulary gets better from comic books, more power to them. '"

Kallenborn has been promoting comic books and graphic novels as a reading tool for years.

Eric Kallenborn's collection of badges from Comic-Cons, expos and other events hangs in his classroom at Shepard High School in Palos Heights. Nov. 13 / Palos Heights

An Anthony Corsi, curriculum director for English in District 218, said, "Eric was the main force behind the creation and adoption of the graphic novels course for 218 – all in the service of giving a wide variety of literature outside of the rather tight constraints of a traditional English class. He's used the graphic novels class as a vehicle for greater student engagement, promoting independent reading and differentiating instruction based on student interests. "

Corsi said Kallenborn also has used the class to introduce students to professionals in the comics field and to participate in conferences and panels.

"Stan Lee was a tireless advocate for comics as a legitimate storytelling medium, and Eric's been a tireless champion of comics with students, parents and administrators," Corsi said. "We're very lucky to have him."

Kallenborn has presented many times at Comic-Cons and said he belongs to a group that puts together the educational programming for the Chicago Comic and Entertainment Expo (C2E2). He's assembling a panel of students to talk about their experience in his upcoming expo in March.

Last year, Kallenborn said, he read 365 graphic novels in 365 days and blogged about them.

He's aware that not every English teacher is on the same page when it comes to reading the graphic versions of classics such as "Les Miserables" or "Sense and Sensibility."

"I know a couple school districts whose teachers still use the comics or graphic novels in the classroom at all," he said. "I think that's a huge detriment to those students."

When faced with doubters, he said, "I ask them what they're into and then give them a (graphically illustrated) book to read and say, 'Please read this and let me know if that does not change your mind,' "He said.

Ashley Rose was one of them.

The Shepard senior said, "I'm not big on comics. I've only seen one of the Marvel movies. So this is something new for me because I never picked up a comic until this class. "

Still, she had no idea who Stan Lee was until Kallenborn told the class about his passing.

Although Lee had been out of the creation business for some time, he made cameo appearances in Marvel movies and signed autographs at Comic-Cons, which is where Kallenborn met him five years ago.

"I've been thinking about everything that I've ever read and own, video games that I've played, that came from those original creators. It's kind of overwhelming the social impact that he had, "Kallenborn said. "It's going to take his passing for a lot of people to really grasp what he meant.

"His ability to create characters that had superpowers but also humanity is what sparked the interest and imagination of the reader," Kallenborn said.

As a kid, Kallenborn said, he read comics.

"But I did not get back into them until later," he said.

As a teacher, he started using a couple of graphic novels to teach "Hamlet" and "Beowulf," both difficult reads.

The medium, he said, helped with understanding and meaning.

Now, he uses all kinds of graphic books, including the Manga series by Udon, that are not hero related at all, he said.

"To be able to create this class and use this medium is awesome," he said.

"I read so much that if you're into I can give you a book you're guaranteed to love," he said. "Being able to recommend graphic novels to people is one of my super powers right now."

If he could choose another?