Minister Çavuşoğlu: We recommend creating a clearing house under D-8 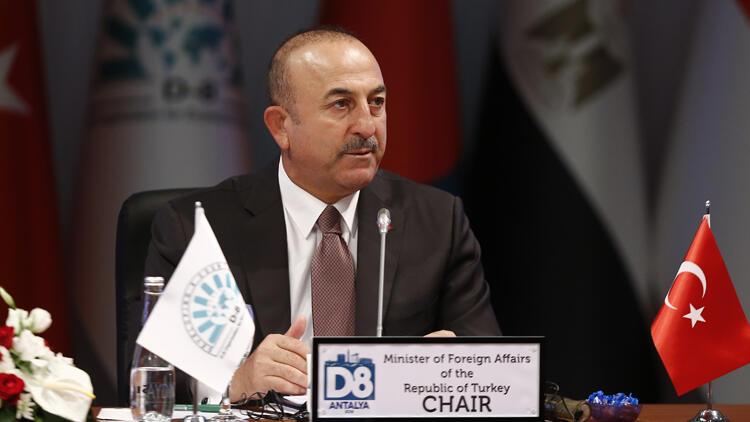 Çavuşoğlu was pleased to announce that he was welcomed by the ministers of the D-8 countries of Antalya in his inaugural speech and expressed his condolences to the people of the two countries due to the Indonesian airstrike and the Egyptian terrorist attack.

Recep Tayyip Erdoğan's President D-8 celebrated the 20th anniversary of the celebration of the D-8 celebration in Istanbul, Cavusoglu last year, as well as the spirit of cooperation and solidarity.

Cavusoglu, the common interests and shared values ​​of peoples on the D-8 platform, which brings together this unifying character of the D-8's success.

In the context of D-8, some shortcomings should not be ignored. Çavuşoğlu stressed that D-8 should develop itself to keep up to the demands of the modern age.

Çavuşoğlu said last year that the Istanbul Summit provided a good opportunity to review the last twenty years of the organization and to recognize the shortcomings. Recalling that the photo of the current situation was at the top of the Istanbul Declaration and Action Plan, Çavuşoğlu pointed out that D-8 expectations are being treated at the highest level.

"Now we have a 10-year roadmap that illuminates the D20-2020-2030 period". Çavuşoğlu said he accepted this timetable in Dhaka, Bangladesh's Cabinet meeting, and will begin work next year.

Çavuşoğlu said: "The D-8 should be transformed to the D-8 in the most efficient way to meet the needs of the era, and we support a D-8 that can respond more quickly to international developments." – He told.

Çavuşoğlu said that he could do less work with less time and energy when speeding up work in this direction and making it more flexible. "We can increase our resources and resources with new resources." He told.

Referring to the agreement on the reconciliation of the 8 countries, Çavuşoğlu expressed his belief that through a constructive dialogue and negotiation a consensus could be reached to make the D-8 more effective.

Çavuşoğlu said that the D-8 project and its results-oriented work should be strengthened and stressed that the prestige of the structure is growing to such an extent that it reaches a wider audience.

Minister of Foreign Affairs Çavuşoğlu said: "The benefits of D-8 can be made concrete and visible to the extent that we are so widespread in commerce, industry, SMEs and the agricultural sector. Chancellors, I see willingness very much about it and I would like to thank them. In this sense, President of Turkish Chambers and Commodity Exchange (TOBB) Rifat Hisarcıklıoğlu is also hosting this meeting.

Nowadays, we experience a period when the exchange rate is used by the political motives of some countries. There are commercial wars. The best answer we can give is through our national and national currencies in our trade. China, like Turkey, Russia, we are about to do the national currency, trade in countries such as Iran and Ukraine. We are continuing this type of trial with many other countries. You can do this in D-8. In this sense, we recommend creating a clearing house in D-8. "