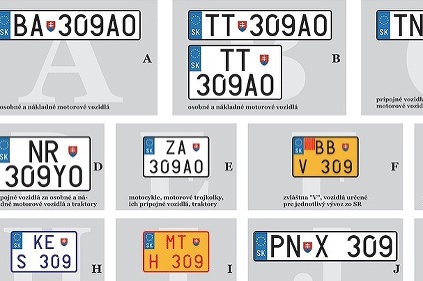 The new EČV will be connected to the vehicle and will not be on the district abbreviation list.

The Vehicle Registration Number (ECV) plate can be “transferred” from the original to the new owner of the motor vehicle, regardless of whether he or she resides in the district. All Slovak registration numbers will be presented, with no district acronym. It was proposed by a group of allies in an amendment to the Road Traffic Act. The Plenum of the National Council (NR) of the Slovak Republic on Thursday approved the vote of 105 of the 129 deputies. The amendment will take effect on March 1, 2022, but has not yet been signed by the President of the Slovak Republic, Susanna aputová.

“The connection of the ECV to the vehicle owner’s permanent residence district has been completely eliminated. At the same time, the seller has been instructed to keep the ECV when the ownership of the vehicle is transferred to another person. They argue that this change will not only save the purchase of new ECVs, but also the substantial state funds for individuals.
The amendment proposal by SAS Deputy Marion Wiskupic, which introduces all Slovak registration numbers, was also approved. These will no longer contain the first two letters indicating affiliation with the registration district, but will be issued gradually from AA-001AA. “The registration number loses its relevance in the summary of the district either because the registration number is linked to the vehicle or because of the portability of the registration number,” the deputy explained. Abbreviations used so far will no longer be used to create new numbers, and letters will not be assigned to specific vehicles.
At the same time, it keeps the possibility of creating your own ECV, but this is currently limited in its current form. So it is not possible to create a registration number or a registration number in the standard format, it is given to the so-called diplomatic vehicles, or a special or special registration number. However, tables can still be imported from stocks even after the new changes take effect.
Plates with registration number can be kept “at home” without being assigned to another vehicle, for a maximum of one year. In addition to cases where the list has been lost or stolen in the past, an amendment has been added to the Bill that allows a list with an ECV to be used repeatedly.
Currently, the model with the registration number is used in the Slovak Republic, which is associated with the car and the district. The structure of the traditional car identifier, the first two characters representing the district, the three characters – Arabic numerals from 001 – 999, and the last two characters AA – ZZ series. According to the currently valid legislation, if the owner sells the vehicle and it remains in the district, the same list with the registration number and the same ECV will remain in it. However, if the owner of the vehicle, as the owner, moves to another district and thus changes the permanent residence, he must also change the ECV of the vehicle.
Under the new law, the so-called two-stage notice of transfer of possession of the vehicle to another person. “If the owner has not yet sold the vehicle, he has to go to the traffic inspectorate, where it is registered under the authority of the new owner, and the new owner has to go to the inspectorate in his district, where he registers and the amendment makes several small changes that will fundamentally help all citizens,” said Radovan Sloboda (submission) .