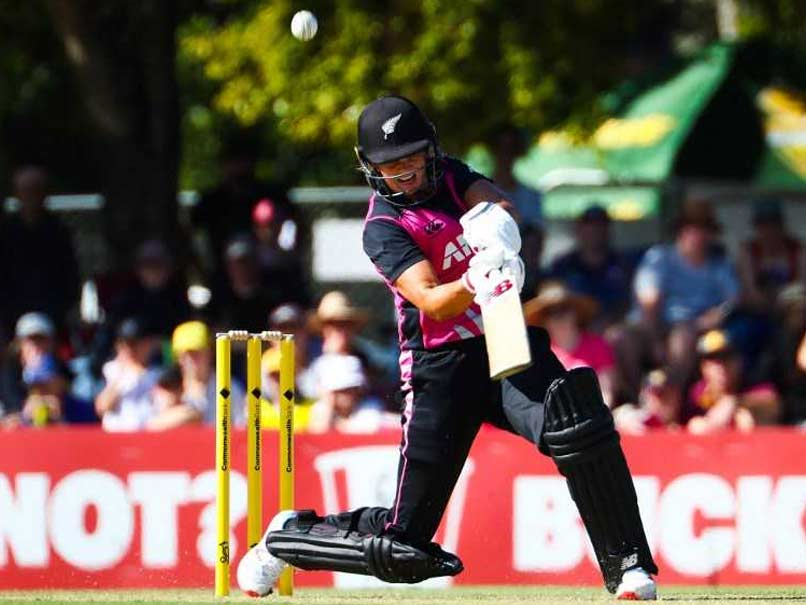 At 23:09 IST: OUT! Arundhati Reddy gets the crucial wicket of Suzie Bates. Trying to go over the field in full field to from Arundhati. Deepti Sharma at backward points takes a simple catch. Vates walks back after scoring 67 runs. NZW 98-5 after 13.4 overs.

4 and fifty comes up for Suzie Bates! Terrific knock under pressure from the right-hander. Bates has held the fort from one end. Bates is now the leading run-scorer in Womens World T20I cricket. NZW 80-3 after 10.5 overs.

22:52 IST: Poonam Yadav misses out on a hat-trick. Bowls the hat-trick ball wide off the stump. Skipper Amy Satterthwaite lets the ball go. New Zealand are in big trouble at the moment. After a brilliant start they lost three wickets in quick succession. NZW 74-3 after 9.4 overs.

OUT! Second wicket for Poonam Yadav. Jess Watkin walks back without troubling the scorers. First ball duck for Watkin. Poonam is on a hat-trick now.

OUT! Poonam Yadav strikes for India. Short and wide outside off from Poonam and Sophie Devine hits the ball straight into the hands of Harmanpreet Kaur in the covers.

At 23:00 IST: Six! Terrific strike from Sophie Devine against Dayalan Hemalatha. Cuts the ball from the first leg of the match.

22:38 IST: OUT! Debutant Dayalan Hemalatha gets the first wicket for India! Trying to guide the ball to the back of the corner and Anna Peterson only managed to edge the ball. Taniya Bhatia takes a sharp catch behind the stumps. Peterson walks back after scoring 14 runs. NZW 52-1 after 6.3 overs.

22:33 IST: Tight over from Deepti Sharma comes to an end. Five runs from it. Arundhati Reddy comes back to the attack to replace Radha Yadav. NZW 40-0 after 5 overs.

FOUR! Beautiful footwork form Suzie Bates on that occasion. Charges down the track against Radha Yadav and puts the ball beautifully in the mid-wicket region to collect her third boundary of the mach. This is a solid start from both the New Zealand openers. NZW 32-0 after 3.4 overs.

22:21 IST: Tidy start from Radha Yadav at the other end. Just two runs from her first over. First bowling change for India. Deepti Sharma comes in to replace Arundhati Reddy. NZW 14-0 after 2 overs.

FOUR! Boundary to end the over from Arundhati Reddy. Expensive start from Arundhati. 12 runs from her first over. Radha Yadav will share the new ball with Arundhati from the other end. NZW 12-0 after 1 over.

FOUR! New Zealand and Suzie Bates are off the mark with a boundary. Arundhati Reddy and Bates halter the ball through the first half. NZW 4-0 after 0.1 overs.

22:13 IST: Suzie Bates and Anna Peterson are out in the middle to start the run-chase for New Zealand. Arundhati Reddy will start the proceedings for India.

Maiden T20I century for Harmanpreet Kaur! What a knock this has been for the Indian skipper. Becomes the first Indian women to hit a century in T20I cricket. Takes a couple of runs on the leg side. IND 192-4 after 19.3 overs.

At 21:53 IST: OUT! Jess Watkin gets the much needed breakthrough for the New Zealand. Jemimah Rodrigues charges down the track but fails to connect with the ball. Katey Martin behind the stumps, takes the bails off in a flash. Rodrigues walks back after scoring 59 runs. IND 174-4 after 18.2 overs.

At 21: IST SIX! Another colossal strike from Harmanpreet Kaur. Hits Amelia Kerr straight down the ground to collect her seventh six of the match. Brilliant batting display from the Indian skipper.

50 for Jemimah Rodrigues! Hits the ball straight down the ground, collects two runs and gets to his fourth half-century in T20Is. Rodrigues has provided excellent to Harmanpreet from the other end. IND 146-3 after 16.2 overs.

What a way to mark your # WT20 debut! Jemimah Rodrigues gets her fifty off 39 balls! #NZvIND LIVE https://t.co/V7VsQBK1dn pic.twitter.com/0qv6DWxgU6

At 11:40 IST: Six! Harmanpreet Kaur is on fire! Another colossal strike from the Indian skipper. Tossed up delivery from Leigh Kasperek and Harmanpreet hits the ball straight down the ground to collect six runs. IND 138-3 after 15.4 overs.

At 50: Harmanpreet Kaur! What a knock this has been from the Indian skipper. Takes a single down the ground to get to her seventh half-century in T20I cricket. Three boundaries and four sixes in her 50-run knock. IND 122-3 after 14.3 overs.

FOUR! Harmanpreet Kaur is looking unstoppable at the moment. Boundary to end the over from Amy Satterthwaite. 18 runs from it including two sixes and a boundary. IND 116-3 after 14 overs.

100 o'clock for India Jemimah Rodrigues hits the ball straight down the ground to collect a single and 100 comes off for India in 13.2 overs.

FOUR! Beautiful shot from Harmanpreet Kaur. Over pitched delivery from Lea Tahuhu and Harmanpreet hits the ball straight down to the ground to collect another boundary. Terrific timing on that occasion from the Indian skipper. 50-run partnership also comes up between Harmanpreet and Jemimah Rodrigues. INDIAN 90-3 after 11.5 overs.

Date: Tidy over from Leigh Kasperek comes to an end. Five runs from it. Lea Tahuhu comes back into the attack for New Zealand. IND 81-3 after 11 overs.

At 11:14 IST Another big hit from the Indian skipper Harmanpreet Kaur. This time Harmanpreet hits Jess Watkin straight down the ground towards a long run to six runs. The ball clears the rope with ease. IND 76-3 after 10 overs.

At 11:12 IST First six of the tournament comes from the bat of Harmanpreet Kaur. Charges down the track against Jess Watkin and slams his mid-wicket to six runs. 71-meter strike from the Indian captain. IND 66-3 after 9.2 overs.

50 up for India! Jimimah Rodrigues hits Sophie Devine's delivery on the cover and picks up a 50-run stand for the Indian team in 7.3 overs. Jemimah Rodrigues batting on 19 alongside Harmanpreet Kaur on 2 runs.

At: Seven-run over from Amelia Kerr comes to an end. Another bowling change for New Zealand. All-rounder Sophie Devine will bowl from the other end. IND 45-3 after 7 overs.

OUT! Another one bites the dust. India are three down now. Poor shot selection from Dayalan Hemalatha this time. Sweeps the full toss outside off the hands of Lea Tahuhu at short leg. Hemalatha's brief stay at the center comes to an end. She walks back after scoring 15 runs. Leigh Kasperek gets his first wicket of the match. IND 41-3 after 5.4 overs.

FOUR! FOUR! Back to back boundaries for debutant Hemalatha. Hayley Jensen struggling with her line in the first over. 13-run over from Jensen comes to an end. IND 37-2 after 5 overs.

At 20:48 IST: OUT! Hayley Jensen takes an absolute blinder in the deep. Short pitched delivery from Lea Tahuhu and Smriti Mandhana goes after that one. Times it superbly but Jensen takes a stunning catch at the boundary line. Mandhana walks back after scoring just 2 runs. Both the openers are now back in the pavilion for India. Tahuhu grabs her second wicket of the match. IND 22-2 after 3.5 overs.

FOUR! Beautifully driven from Jemimah Rodrigues. Wide delivery outside off stump from Lea Tahuhu and Rodrigues pounces onto that one. Places the ball perfectly between the point and the cover fielder to collect the first boundary of the match.

Published: Terrific over from Lea Tahuhu comes to an end. Five runs and a wicket from it. Another bowling change for New Zealand. Leigh Kasperek replaces Jess Watkin at the other end. IND 14-1 after 2 overs.

OUT! Spot on from Lea Tahuhu. Lahore loses the back of the net and tries to get the ball back for a corner. India lose their first wicket Taniya walks back after scoring 9 runs. IND 9-1 after 1.1 overs.

The first wicket of # WT20 goes to @Ltahuhu, who strikes with her first ball of the tournament! India 9/1 after 1.1 overs. #NZvIND LIVE https://t.co/V7VsQBK1dn pic.twitter.com/orwXVIt6Lt

20:34 IST: Two boundaries and a single from Jess Watkin's first over. Lea Tahuhu will share the new ball with Watkins from the other end. IND 9-0 after 1 over.

FOUR! India and Tania Bhatia are off the mark with a boundary. On the pads from Jess Watkin and Bhatia the ball crosses the field. IND 4-0 after 0.1 overs.

20:30 IST: Openers Taniya Bhatia and Smriti Mandhana are out in the middle to start for India. Off spinner Jess Watkin will start the proceedings for the New Zealand. Here we go!

20:24 IST: Both teams are out at the center with the match officials for the national anthems. We are minutes away from the start!

At 20:00 IST: Indian skipper Harmanpreet Kaur wins the toss and elects to bat against New Zealand.

India have won the toss and will be bat first in the opening game # WT20 2018! Follow our live blog at the link below #NZvIND LIVE https://t.co/V7VsQBK1dn pic.twitter.com/hDlnXWaBRh

Will the @BCCIWomen be ready to start their tournament on a winning note?#NZvIND # WT20 pic.twitter.com/IDzfKYQzoi

The @WHITE_FERNS are getting their blood pumping! #NZvIND # WT20 pic.twitter.com/B6bGJFDEIm

What a moment for Dayan Hemalatha!

Congratulations to Dayalan Hemalatha who is making her T20I debut for India today!#NZvIND # WT20 pic.twitter.com/tUZmpbAkX6

Hello and welcome Women's World T20 between India and New Zealand from the Providence Stadium in Guyana.

Captain Harmanpreet Kaur and recently appointed coach Ramesh Powar insisted that the team had learnt from that final loss and the presence of youngsters, including six World Cup debutants, makes the squad "fearless". India have never won the World T20 in their previous five attempts with their best result, a semifinal appearance, coming in 2009 and 2010.

This is the first standalone World T20 for women after the men's event in the past editions. In the lead-up to the World T20, India have beaten Sri Lanka at the A home. What should give them additional confidence going into the opener is the wins against reigning champions West Indies and England in the warm-up matches.