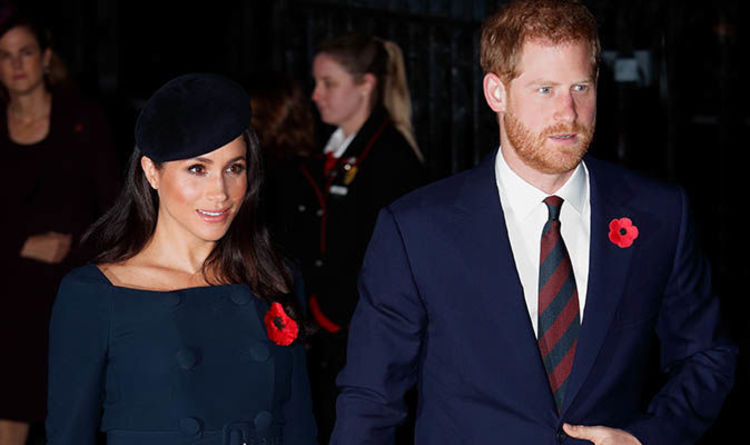 Meghan Markle and Prince Harry were out in London on Sunday to mark the Remembrance Day centenary. Meghan was dressed respectfully in black to mark 100 years since the end of World War One. All the Royals donned poppies to remember the fallen service personnel of war.

The Duchess of Sussex watched the solemn proceedings from the balcony of a separate window from the Royal Family outside the Cenotaph war memorial.

Some assumed this choice of vantage point was a slight, but royal expert has said this is not the case.

Joe Little, managing editor of Majesty magazine, told PEOPLE: "She was not as prominent as some people might have expected, but there's a pecking order."

And a palace source said Meghan's balcony position "would have come from her.

"There's no one laying this out, telling her where to stand.

READ MORE: Could Meghan and Harry part ways with Kate and William for THIS reason?

When we see Meghan next?

Kensington Palace has yet to release a future traveler for the Duke and Duchess of Sussex.

There is a chance we'll see Meghan take a step back from the limelight as she prepares for the arrival of the couple's baby.

While on tour in Australia, Meghan's team whitled down her commitments to allow the Duchess more time to rest.

A royal expert who was in Australia with the tweeted: "One source tells me it is not that the duchess is feeling poorly, but they are trying to 'pace' her given how many engagements are coming up."

Will Kate and William have a fourth royal baby?

Meghan told one royal fan who turned out to see them on the tour that the pregnant felt like "jet lag" and she was up at 4.30am doing yoga as she could not sleep.

At one of the engagements Harry attended without his wife, he told the fans Meghan was "resting back at home."

"Being pregnant takes its toll," he said.

However, if Meghan decides to take a leaf out of her sister-in-law's book, we may see a fair bit of the Duchess before she delivers.

READ MORE: When did Meghan and Harry marry? When is she due?

Kate, Duchess of Cambridge, was struck down by hyperemesis gravidarum – a severe form of morning sickness – in all three of her pregnancies.

The illness meant the Duchess of Cambridge was out of public life for the early phases of her pregnancy, but once she felt better she was busier than ever.

Particularly in her most recent pregnancy – while Kate was pregnant with Prince Louis, she undertook more official engagements than her husband Prince William or Prince Harry.

If this is the example Meghan follows, there's a good chance for the baby growing Sussex bump before Meghan goes on a maternity leave.